This is the first of a series of posts in which I will develop a structural frame analysis program operating within Excel.  The first few stages will be mostly spreadsheet based, with later stages using VBA routines to analyse data generated in the spreadsheet, and ultimately linking to external dll programs to do the heavy number crunching involved in the solution of complex frames.

This post will look at the analysis of a single 2D beam element subject to any combination of transverse and and axial loading, with any three of the six end freedoms restrained.  This will introduce the use of the stiffness method, setting up of a beam stiffness matrix and a matrix of end actions, and solution of these matrices using the Excel matrix functions.

As always, all the files presented here will be available for download, and all my code will be open source.  In addition to Internet resources, which will be referenced where applicable, the main sources of background information are:

The essence of the “stiffness” method of frame analysis is to set up a series of equations:

If K and f can be generated for any specified frame subject to a known set of loads, the deflections of each node can be found using the relationship:

In this post the “frame” will consist of a single horizontal beam, and the matrices will be formed and solved on the spreadsheet, with the aid of a User Defined Function (UDF) to generate the applied nodal loads from the specified distributed and point loads and moments, that may be applied to any part of the beam.

The required input is shown in the screen shot below: 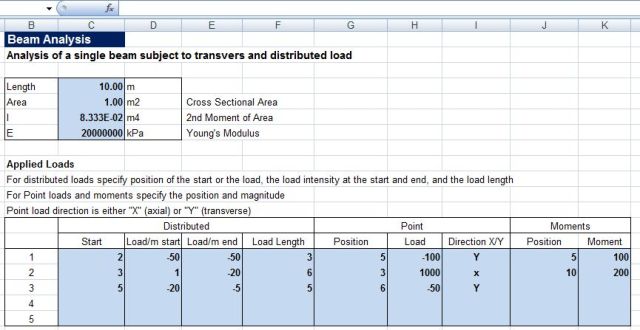 The nodal actions required for the analysis are the “fixed end” moments and reactions due to the applied loading, that is the end moments and reactions forces that would be generated by the applied loads if the ends of the beam were fully fixed against rotation and translation.  These are calculated by the UDF “FEMACT()”, which has as inputs the beam length, and the thre tables: distributed loads, point loads, and moments.  This UDF will be described in greater detail in a later post.  The output of the UDF is shown in the screen shot below:

The formation of the beam stiffness matrix, and the matrix coefficients for the example beam are shown in the screen shot below.  The beam stiffness matrix coefficients are derived from the standard beam slope deflection equations, combined with the application of Hooke’s law for axial loads.  Further details of the derivation are given in many structural analysis textbooks. 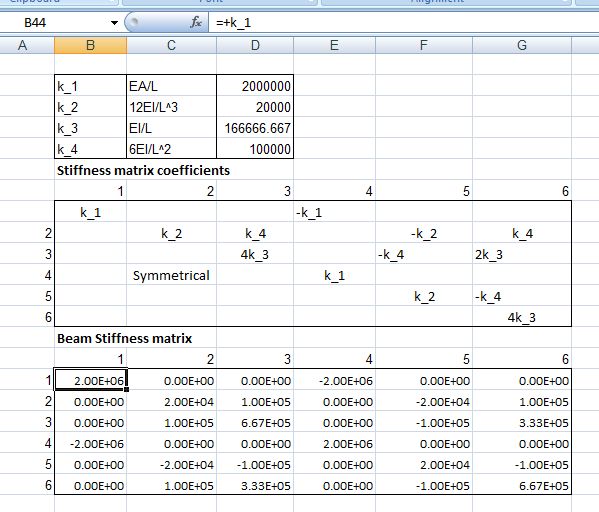 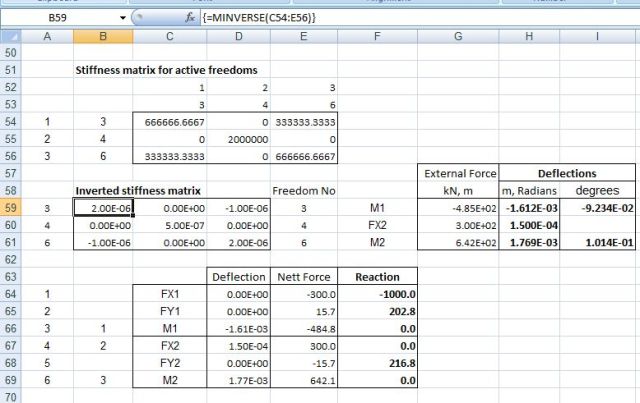