… is unveiled for the first time:

Click image for link to map with pan and zoom: 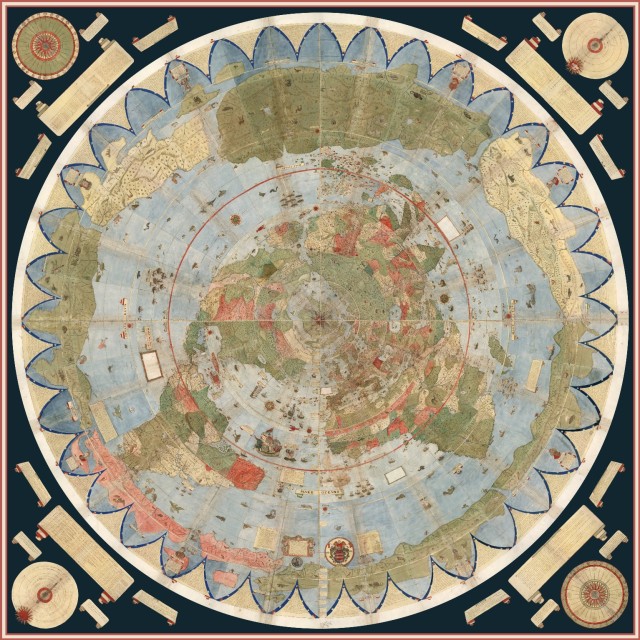 On July 25, 01585, near the end of a century of unprecedented change, four Japanese boys stopped in Milan on their way back home to Japan. They’d been sent as the first Japanese Embassy to Europe three years earlier by the Jesuit missionary Alesandro Valignano. Their European tour took them through Spain, where they met King Philip II, and to Rome, where they met with the Pope. Now, in Milan, they encountered Urbano Monte, a gentleman scholar from a wealthy Milanese family whose interests had lately turned to geography. Writing about meeting the Japanese boys, Monte “commented on their appearance and manners; the former he found odd but he thought their manners impressive and their eating habits fascinating.”

The encounter with the Japanese embassy inspired Monte to undertake an ambitious project that would consume his efforts for the next twenty years: the Trattato Universale, a four-volume compendium and geographical treatise that attempted to showcase the entire geographic knowledge of the world. The third volume of the Trattato contained his most impressive and innovative work: a map of the world across sixty individual sheets that, were it to be stitched together as his instructions dictated, would be the largest world map made in the sixteenth century.

See the full article at:  Urbano Monte’s planisphere was centuries ahead of its time

This entry was posted in Newton and tagged early World map, Urbano Monte. Bookmark the permalink.