Cracks in the Dome

… but those caring for the dome worry that it has recently embarked on a course of self-destruction. When or if a disaster could take place is anybody’s guess, experts say. What is certain is that for two years four fissures that run from the top of the dome to the church foundations church and from the inside walls to the outer skin have been steadily getting wider.

None of the experts on the commission is sure exactly what is happening inside the dome right now, under the hot sun of the Tuscan summer. They believe the concrete acts as a fulcrum so that when the masses push together below the holes, they are forced apart above. Last summer measurements showed that the A fissures in the dome widened instead of closed during the hot season for the first time. The same phenomenon is being repeated this year.

Not to be outdone, on 23rd October 1987 the California based Merced Sun-Star reported:

By this time cracks which the NY Times had reported as opening “to a width of about three millimetres in winter”, were said to be increasing in width at a rate of 3 inches (75 mm) per century: 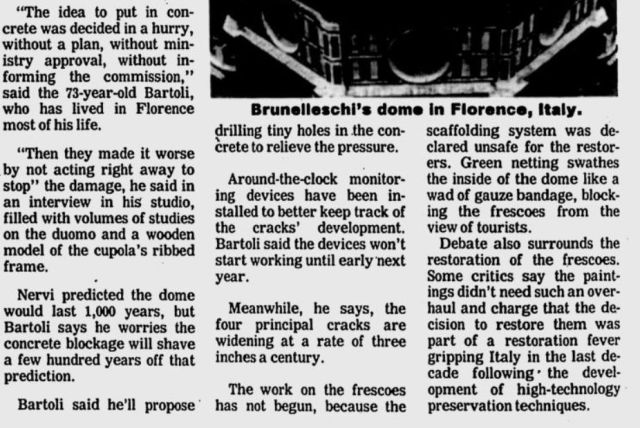 Needless to say, the growth rate of 3 inches per century was a case of journalistic misunderstanding (to be charitable), but nonetheless there was evidently genuine cause for concern at the time, and as a result the extent and sophistication of the crack monitoring systems (which had been in place since 1955) were greatly increased in 1987, and this monitoring has been continuing ever since.

In January of this year a conference on “The Monitoring of Great Historical Structures” was held in Florence, which (naturally) included a paper on the monitoring of the dome of Santa Maria del Fiore, which is included in full (or at least a greatly extended abstract) at: http://www.opamonitoring.com/docs/abstract.pdf

Quite apart from the alarmist newspaper articles, there has been much debate over the centuries about the cause of the cracks.  The two diagrams below, it seems to me, explain their cause and position quite clearly: 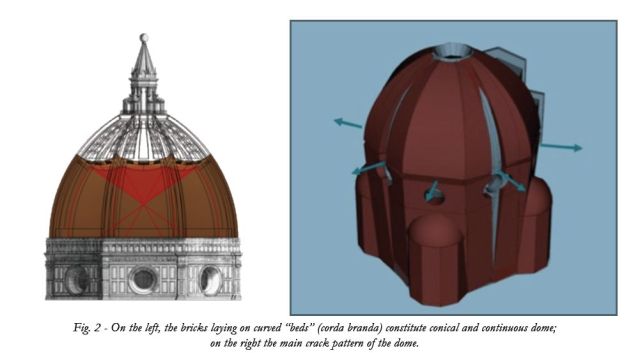 Larger and older cracks occurred in the segments with least restraint

Other interesting data concerns the development of the cracks over time, and the seasonal variation in the cracks.  The graph below shows that far from having increased suddenly in the recent past, the cracks have developed over the full history of the structure, with a steady decline in the rate of growth, to a current rate of about 6 mm/century:

The causes for alarm in 1987 appear to have been that:

The chart below shows that far from increasing, the rate of crack growth was markedly reduced during the time that scaffolding was erected for work on the frescos (1980 – 1996), and returned to the old rate after removal of the scaffolding:

The question of seasonal variation shows a stranger still variation from the reports of 1987.  The graph above does not clearly distinguish the seasons, but does show that the maximum crack widths occurred at the same time of year before, during, and after the scaffolding works.  Moreover the graph below, relating crack width to temperature, clearly shows a positive correlation, i.e. the maximum crack width occurring in summer, not winter:

In conclusion it is clear that the newspaper reports of 1987 were unnecessarily alarmist, and that the cracking of the dome has developed reasonably uniformly over the life of the structure.  On the other hand the paper referred to here does not consider exceptional events, such as a “direct hit earthquake”, and other sources suggest that investigation of the response of the structure to this sort of event are still incomplete.  This suggests that, given the importance of the structure, the comparatively small cost of reinforcement around the base of the dome would provide worthwhile insurance both against rare seismic events, and the continued work of regular seasonal variations.