I recently posted on some Python Traps, focussing on code where changes in the values of sub-routine arguments were not reflected in the calling routines.  The reverse can also be a problem: if an array, a, is passed to a sub-routine in VBA, then a new array, b, with the same values created in the sub-routine using b = a, any changes to b will not be reflected in a.

In Python things work differently; the statement b = a means that the array a is now also called b, so changes to b will also change a, both in the sub-routine and in the calling routine.  This was discussed in some detail in The meaning of = in Python; this post looks at some practical examples, and how to create a new copy of an array, rather than just giving the existing array a new name.

The screenshots below illustrate further variations of the routines discussed in the Python Traps post:

With a 2D list (list of lists) however the y array created with the Python copy function behaves the same as using y = x; the changes in y are also seen in x.  This is because copy only creates a new object for the top level list.  The lower level lists still refer to the same objects as in the x list.  To create a new list of lists at all levels it is necessary to use the Python deepcopy function: y = copy-deepcopy(x).

The numpy copy command however works the same on all levels of Numpy arrays. In the final example below the 2D array x is not affected  by the changes to y, which was created with y = np.copy(x). 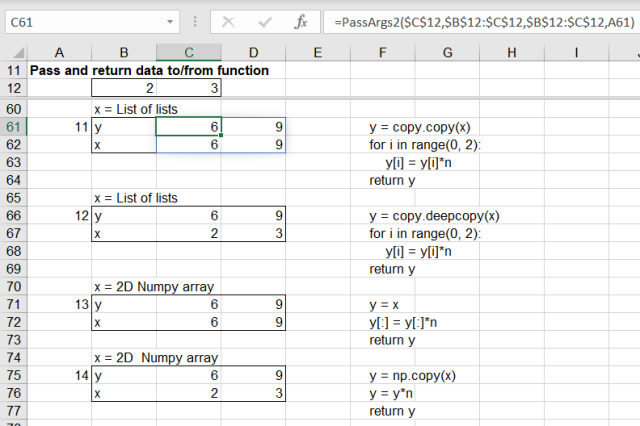