Following on from the opening post in this series (Debugging VBA) I will now look at the main debugging tools provided in the Visual Basic Editor (VBE):

The Immediate Window allows interaction with the code while it is running.  In the VBE select View-Immediate Window, or Ctrl-G to display the window.  Some examples of using the window are shown in the screen shots below:

The value of any variable may be displayed as shown:

The same results can be obtained, with less typing, using a For Loop:

Immediate window using a For Loop

Values may also be displayed using the statement Debug.Print, rather than “?” :

It is also possible to enter more complex commands in the Immediate Window.  In the example below the array values are subtracted from the values calculated on the spreadsheet, to check that the result is equal to zero, or very close to it.  The full line is: 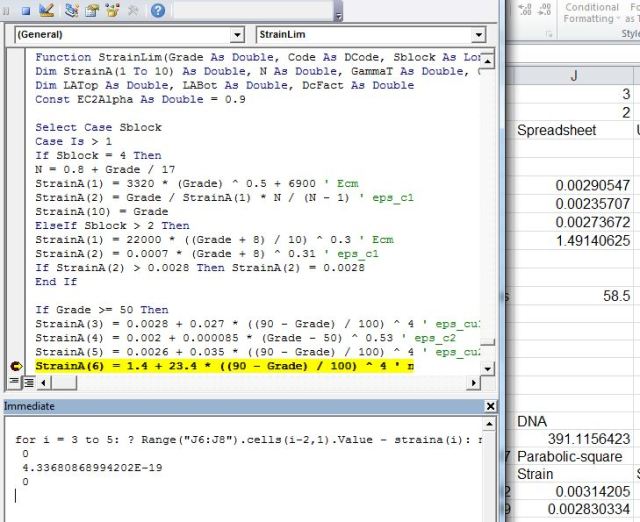 The Debug.print command can also be used within the code to send data to the immediate window:

The other main VBE window used in debugging is the Watch Window, allowing the value of specific variables to be monitored.  The Watch Window is opened from the View menu, and is initially blank.  A watch point is added through the Debug-Add Watch menu, which opens the Add Watch dialog, having the following features:

Alternatively a Watch Value Point may be inserted through the Debug – Quick Watch menu (or Shift-F9), with the cursor located at a variable in the Edit window.  This will insert a watch point for the selected variable, which may then be edited by right-clicking on the variable line in the Watches window.  A third way to add (or remove) watch points is through the right click menu in the Watches window.

Use of the Watches window, with three watch points, is shown in the screen shot below:

Note that in this case, there are no specified break points, but when the function was initiated it ran through until the first watch point had been  evaluated, where execution was stopped because this point had been specified as “break when value changes”.  The next two points were then evaluated by using the F8 key to step through the code, giving the results in the screen shot above.

A watch point may also be specified as a complete array, rather than a specified array position.  This is shown in the screen shot below:

Watch point on an Array

In this case the watch point has been specified as watch only, and a break point has been inserted below the point in the code where array values 3 to 6 are evaluated.  As with the Locals window, the array initially appears as a single summary line, and must be expanded to view the values for each item.