The comments from Bill Harvey in the previous post prompted me to have a closer look at the functions available in Excel for working with vectors.  Here is a complete list of them:

This is a strange omission, even by Microsoft standards, considering that they have gone to the trouble of programming several esoteric mathematical functions such as the Bessel Function, but they haven’t provided the most basic support for operations on vectors.  It’s easily fixed with some User Defined Functions (UDFs) of course, so that is what this post examines.  The VectorFunc.xlsb spreadsheet includes full open source code for all the functions.  Many of the UDFs in this spreadsheet return results as an array function.  Refer to Using Array Formulas if you are not familiar with their use.  In the following post I will have a closer look at the application of vector methods to calculating areas and other geometric section properties.

In the course of researching this post I came across the Softsurfer site, which contains detailed descriptions of coordinate geometry related algorithms, including c++ code.  Several of their vector related functions have been converted to VBA and are included in the download spreadsheet.

The first step was to write a routine to convert different input types (i.e. horizontal or vertical spreadsheet ranges, or 1D or 2D arrays of doubles or variants) into a uniform format for processing by the vector functions with minimum overhead.  That is what the code below does:

The steps in GetVect are:

Note that the function returns the size of the array Vect2, but because Vect2 was passed as an empty double array “by reference”, its contents are available to the calling procedure.

In addition to Dot and Cross the spreadsheet contains the following vector related functions (optional function arguments are shown in italics):

Examples of the use of these functions are shown in the screenshots below.  Download VectorFunc.xlsb for more details and open source code. 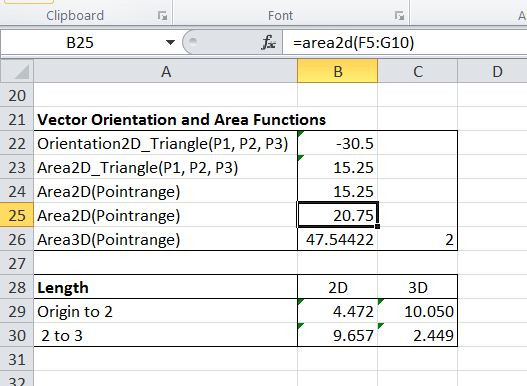 11 Responses to Dots and Crosses