In the first case the answer is when one “35” is on an Excel spreadsheet and the other 35 is in VBA.  The question arose from the ongoing continuous beam discussion with metroxx, who had, quite reasonably, generated a series of output points by calculating the length of one step (35/30) then adding this value to the previous length in 30 stages.  This mysteriously caused an error in the function for no obvious reason.

Stepping through the code I found that the error was occurring when the last output point was compared to the beam length and found to be greater.  The mysterious part was that both on the worksheet (formatted to 15 decimal places), and in the VBA Locals window, both values displayed as being exactly 35.  Also entering the formula = A62 – 35 returned exactly zero.

To investigate what was going on I wrote the short VBA function shown below:

The function simply subtracts B from A, but using this function with the incrementally generated “35” as A and the “exact” 35 as B returned a value of 7.11E-15, even though stepping through the routine both variables displayed as exactly 35 in the locals window. 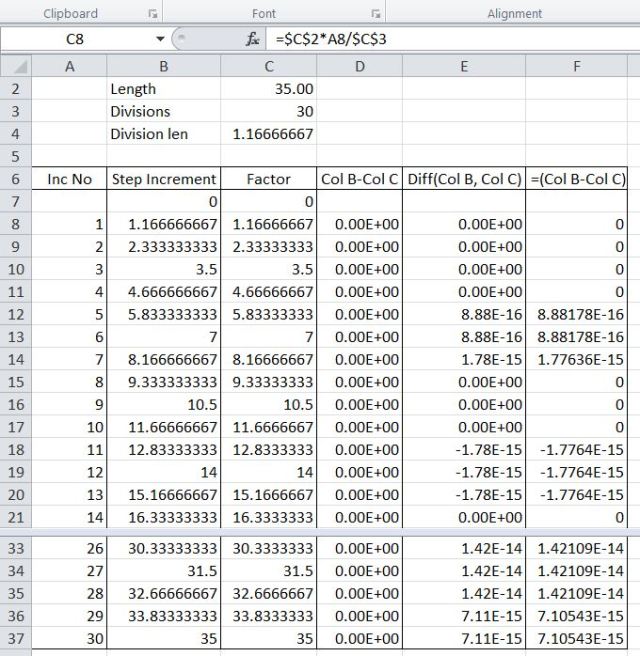 These differences are of course caused in part by the fact that all values are stored as binary floating point values, that cannot represent all decimal or fractional values exactly.  This is described in several Microsoft documents (e.g. Understanding Floating Point Precision), which all claim that Excel follows the IEEE Standard for Binary Floating-Point Arithmetic.  Clearly this is not the whole story though, since the example given generates errors up to an order of magnitude greater than the maximum difference between any exact value and the nearest floating point value, and also generates different results depending on how worksheet formulas are entered.

I would be interested if anyone has any more background on exactly how these things are handled in Excel, but for practical purposes I think the lessons are: 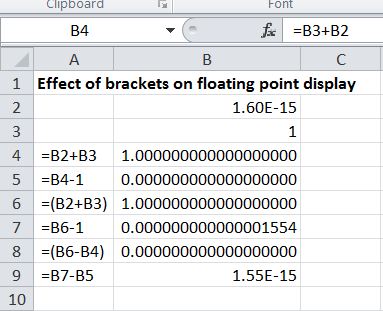 Another example of the effect of brackets: