Global to Local for plates (and three node beams)

The Glob_to_Loc function (see Converting from global to local coordinates (and vice versa) ) converts forces and deflections of a beam from the global coordinate system to the local system, defined by the longitudinal axis of the beam and a rotation angle from the horizontal plane.  The rotation angle is required because a beam defined by its two end nodes has no defined rotation, but an alternative is to define the beam orientation with three nodes; i.e. the two end nodes and a third node lying on the local x-y plane.  This approach is also used for plate-shell elements, where the plane of the element is defined by the coordinates of the corner nodes.

To work with elements defined by 3 nodes I have added two new user defined functions (UDFs) to the IP2 spreadsheet:  Glob_to_Loc3 and Loc_to_Glob3.  The new version of the spreadsheet may be downloaded from: IP2.ZIP – including full open source code.  The download zip file also includes a Python version of these functions.  Use of the Python versions requires the PyXll add-in.  See Installing Python, Scipy and Pyxll for more details. Details of usage are shown in the screen-shot below (also included in the download file).:

The example below shows input for a trapezoidal plate element, followed by results from the FEA program Strand7:

For a 3 Node beam element, using the Strand7 definition of the beam principal axes, use the Axtype = 3 option as shown below.  In this case the beam orientation is defined by the 3 node coordinates, with an additional rotation of 30 degrees. 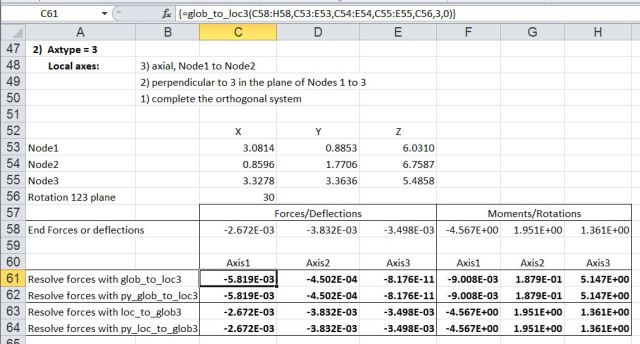