Following a comment here I have prepared a spreadsheet that works through the Tanh-Sinh Quadrature process with on-sheet calculations.  For that purpose Graeme Dennes has provided a simplified version of the code:

The spreadsheet calculations and the new VBA code have been added to the zip file with the full set of integration routines, which can be downloaded from:

Screenshots from the new spreadsheet are shown below, and the download files include unprotected spreadsheet calculations, and full open source VBA code.

The VBA version of the Quad-Rodriguez_Tanh-Sinh function can be used in the same way as the other functions by Graeme, either evaluating functions entered as text on the spreadsheet, or using the built-in VBA functions: 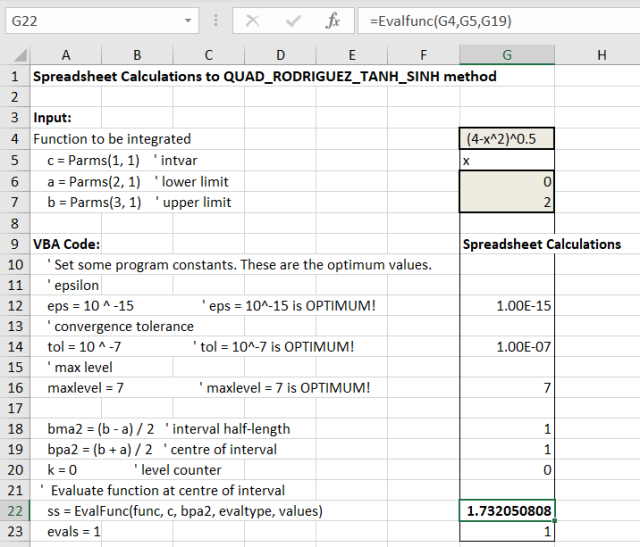 The results from each of the four outer loops are shown below, with increasing precision from each loop.  The final loop returns the exact value of pi to 15 significant figures (the greatest precision available in Excel), and agrees exactly with the VBA function results:

Note that if a different function is entered in cell G4 the spreadsheet calculations will be updated, but the “actual error” figures will not be correct, since they assume an integration with a result equal to pi.  Also there may be small differences between the VBA and on-sheet results, since the VBA adds iterations where necessary to reach the required precision, but the on-sheet calculations have a fixed number of iterations.