This animation was produced in response to a video of real pendulums performing similar tricks:

Not having an animation program I thought I’d use the finite element program Strand7.  Modelling the pendulums was easy, just 15 beam elements with a “translational mass” attribute on the end (more on the exact length of each pendulum later).

Strand7 will perform a dynamic analysis, so I could have given each pendulum a displacement and then carried out the analysis of their movements over 90 seconds, but because I was only interested in generating the patterns in this case I decided to take the easy way out and generate the pendulum movement by inputting the displacements directly.  The procedure was:

The only remaining problem was how to enter 1800 x 30 factors quickly and accurately.  The solution (naturally) was to set up a table of the X and Y displacements of each pendulum in Excel: 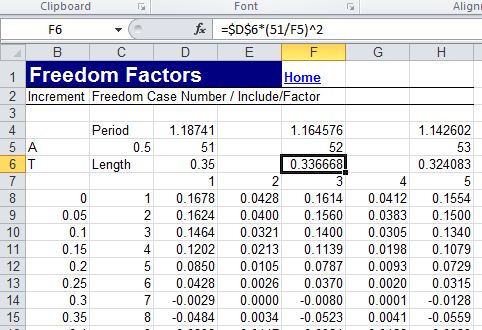 These factors were then transferred into Strand7 using the program’s API (the use of which I will describe in more detail in later posts).

The only remaining detail was to find the correct pendulum lengths to generate the patterns I was after.  After a little experimentation it became clear that each pendulum much have a different integer number of cycles over some fixed period.  I fixed the first pendulum length at 350 mm, which has a period of 1.187 seconds, or 51 cycles over 60.558 seconds.  The other pendulum lengths were then adjusted to have 52 to 65 cycles over the same time period, giving a range from 336.7 mm to 215.5 mm.