Deflections and Moments in Rectangular Plates

Following a question here I have compared tabulated coefficients for deflections and bending moments in a rectangular plate with results of a Strand7 analysis using 8 noded plate/shell elements.  The results are summarised below, and in a spreadsheet which also includes copies of the tabular data:
Plate def res

The sources of the tables were:

For the purposes of comparison, a rectangular steel plate, restrained against deflection and moment on all four sides was analysed with a uniform load of 1 kPa.  Dimensions and material properties are shown in the screenshot below, together with the results of the Strand7 analysis:

The factors from the four sources are shown below:

The deflections and bending moments derived from these factors are shown below for a/b = 1, compared with the Strand7 results:

The source of the cubic equations defining the Pilkey factors is not given, but it seems likely  they are based on fitting a cubic curve to tabulated values over the a/b range of 1 to 2.  The source of the tabulated values is not given, but does not appear to be Timoshenko.  The screenshot below shows curves fitted to the Timoshenko and Pilkey factors for central Mx, using the Excel Linest function.  Although the tabulated coefficients are all within 3%, the coefficients for the fitted cubic curves are very different: 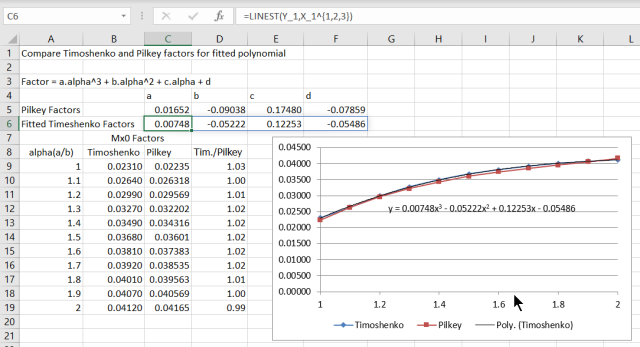