This post is a follow up to Using LINEST for non-linear curve fitting and the following comments from Scott Rogers and Lori Miller.  Scott found that he was getting different results from Linest and the xy chart trend line for polynomials of order 5 and 6 (6th order being the highest that can be displayed with the trend line).

In order to investigate this I have looked at fitting polynomials of different degree to the function y = 1/(x – 4.99) over the range x = 5 to x = 6.  It should be emphasised that high order polynomials are completely inappropriate for interpolating a function such as this; it was chosen purely because it shows up the differences in the results from the four different methods examined.  These were:

The screenshots below show the following results for polynomials fitted to the test function:

the Linest, chart trend line and ALGLIB results are essentially identical, but the matrix function is already showing significant differences.

the Linest, chart trend line, and ALGLIB results are still in good agreement, but the matrix function results are now completely different. 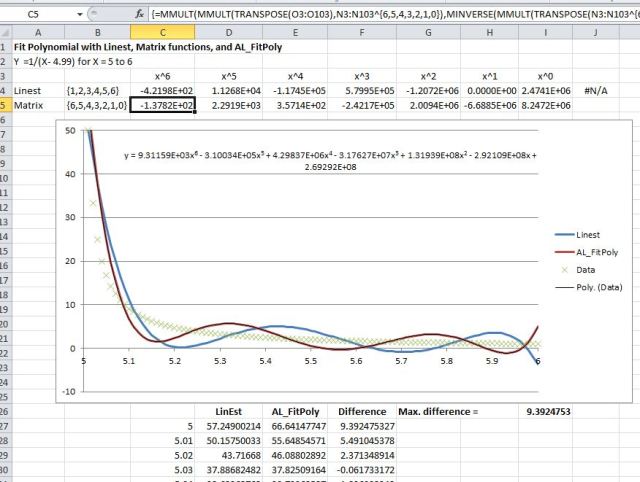 The Linest and chart trend line results are now completely different, with Linest having returned a coefficient of 0 for the x term.  The ALGLIB results appear visually identical to the chart trend line.

For the 7th order only the Linest and ALGLIB results are plotted:

The Linest line has retained a form similar to the 5th order results (with zero coefficients for the x squared and x terms), but the ALGLIB line is consistent with a 7th order polynomial.

It can be seen that in all cases the polynomial lines oscillate above and below the data, which is a feature of fitting high order polynomials to a monotonic function.  To check if the behaviour of the Linest output was a result of fitting a polynomial function to inappropriate data the same exercise was carried out on a cyclic function:

The results for fourth order to seventh order polynomials are shown in the four screen shots below: 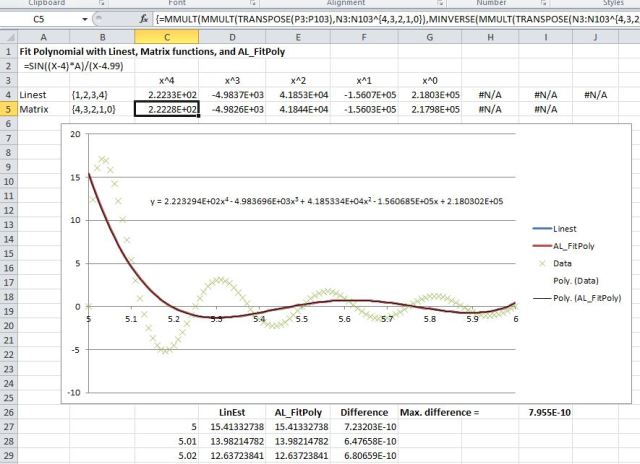 The results were very similar to those for the monotonic function, with the Linest results being different from the chart trend line at the 6th order, and with the x squared and x coefficients from Linest being zero for the 7th order line.

Two further lines were plotted with 10th order polynomials (Linest and ALGLIB) and 15th order (ALGLIB only), to check if a reasonably close fit to the data could be found:

It can be seen that the 10th order Linest line has maintained the form of the 5th order polynomial, with 5 of the 11 coefficients being set to zero.  The ALGLIB results appear to be appropriate to the order of the polynomial curve, and a good fit has been achieved to the data with a 15th order polynomial.